In the myths of Scandinavia, Germany and Switzerland the Nixi is a freshwater being that haunts lakes and rivers. Female Nixis are like mermaids who entice humans into the water. But unlike mermaids, Nixi are seldom good with green hair and skin. Male Nixis look like old men from the neck, with the body and brush of a fox and the hooves of a horse. 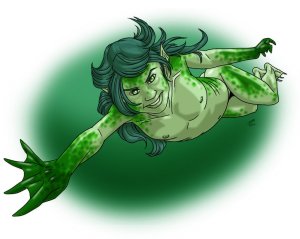