Jaculus is a creature that is described in classical Roman and European folklore particularly in the Middle. Its name means javelin, which probably derives from its habits of itself its victims from a high tree and sinking its fangs into their neck. Described as a vast winged serpent with two forelegs, it is mentioned by the Latin poet Lucan (AD39-65) in his work Pharsalia. It is probably related to the Wyvern. 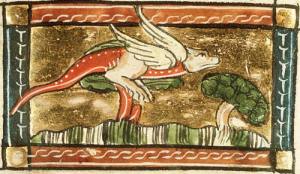