The Oceanids are sea nymphs, the 3000 daughters of Oceanus and Tethys. One of the daughters, Doris married Nereus the old man at the Sea and bore the Nereids. Another was Styx the guardian of the river that divides the living from the dead. 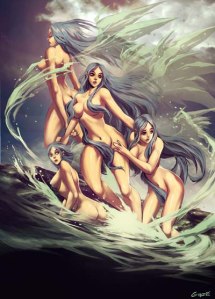