Giltine origin Lithuania Giltine is a snake goddess of death. She roams cemeteries at night, licking coffins and corpses collecting the poison of the dead, which she will then use on the living whenever their destined time comes. Unlike so many angels of death who only appear after someone has died to serve as escorts to the next realm Giltine actually pulls the plug she terminates life of the person. Giltine and Laima are sisters sometimes they work in tandem as a pair of death goddesses. Laima distracts and comforts the dying person while Giltine delivers the coup de grace. Giltine has a venomous tongue like a serpent: she delivers the kiss of death alternatively she suffocates or strangles victims. Giltine may be depicted with a sickle like the Grim Reaper, but allegedly she does like shedding blood of only because it may mark her white dress.  Giltine can be delayed (a popular folklore theme), but ultimately she cannot be stopped. She magically opens all doors or locks she cannot be prevented from entering or from performing her killing function if it’s genuinely someone’s time to go. Giltine usually takes her place at the head of the sickbed. Giltine takes on the form as a tall cadaverously thin woman dressed in white. She may be wrapped in a shroud or in a romantic Gothic white dress. Giltine can make herself so ting that she could fit in a nutshell. Alternatively, she manifests as a venomous snake or even just as a shadow. Giltine may be invisible she may manifest only as the sound of a whip cracking three times. The psychically gifted may sense Giltine as a chill down the spine. 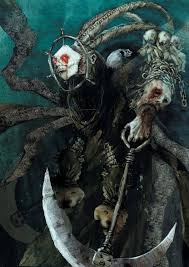