In the French folklore Basilic was a dragon that would haunt the city of Vienne taking people and cattle. If one were to stare at it they would be petrified. The dragon kept scaring people until the knight Fretard overcame it confining it to the well. It said that Basilic would merge every 10 years to the city and could be overcome if someone saw it before it could gaze upon the onlooker. 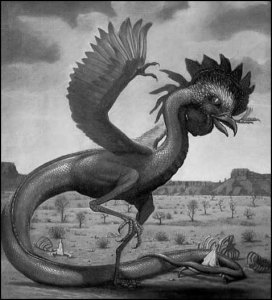