In the Yorkshire folklore, the Padfoot was an inhabitant of the moorlands around the city of Leeds. It was reported to have many shapes like a great sheep with shaggy fleece and a red-eyed or a black donkey or great white dog. The first sign that a traveller knows of its appearance is the sound of its footsteps padding behind them in the dark sometimes accompanied by the clanking of chains. 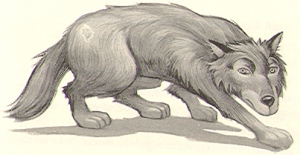