The origins of the golden-plumed Greek Phoenix lies in with the Egyptian Bennu that was a heron said to be the first creature that emerged from the primordial mud. The Bennu is the bird sacred to Ra. Venerated as the manifestation of the sun god of Heliopolis it was said to appear only once every 500 years. The Phoenix lived upon the dew and flew to other lands, gathering a ball of fragrant myrrh to make a pyre on which it burned itself to death. After three days from death rise from the ashes. Pliny relates that the Phoenix gathers a nest of cassia and frankincense in which to die and incubate it.

Under the Imperial Roman dispensation, the Phoenix became the symbol for the undying Empire and was depicted upon coins and mosaics. In Persia, the Phoenix was known as Al-Salamandra which can be a four-footed beast or a bird which lives in fire. A similar story about fiery death is told about Simurgh. Both of these birds appear to be related to the Roc and the Garuda of Hindu belief. The Jewish legend speaks of the Phoenix as the Milcham; When Eve had taken and eaten the forbidden fruit of the Tree of Knowledge, she conceived envy of the animal’s sinless nature and she enticed all to eat of the tree like herself. All except the Milcham who did not obey and he alone was rewarded by the gift of immortality. It was allowed to live for 1000 years. When the Phoenix passes away a fire consumes the Milcham leaving only an egg that repeats the cycle of living for 1000 years and the process goes on and on. The length of the life span of the Phoenix is told by the Greek saying from Hesiod that measures the generations.

“The croaking cormorant lives nine generations of ageing men, The Stag lives four times the cormorant, But the Phoenix outlives the nine crows, And we, the fair-haired nymphs, Daughters of Aegis-bearing Zeus, Outlive the phoenixes.”

The Christian version of the Phoenix is the three-day rebirth this as seen as a figure of Christ resurrection on the third day after his crucifixion. In China the Feng Hwang it is seen as a symbol of conjugal union. The Phoenix appears In Harry Potter series as a pet of Dumbledore’s called Fawkes that dies and it rises from the ashes as a newborn. 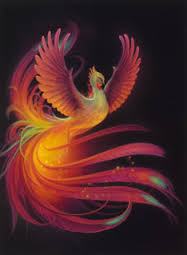