The Roc (or Rukh) is a great bird of the Middle Eastern legend. It has the appearance of an eagle or vulture with horns on its head and a wing span of great width. The Roc is able to pick up an elephant with ease. Marco Polo stated that he had seen one of the great feathers while at the court of Kublia Khan. He also reported that a Roc had carried off a bride. In The Thousand and One Night’s Tales of Arabia, the sailor Sinbad was shipwrecked on an island that was made of brushwood enclosing a dome. It was not until the sky grew dark that he realised that the whole island was a nest and the dome was an egg. He hung onto the talons of the Roc and drop from the grasp without the Roc noticing. It is thought that the giant Aepyornis of Madagascar that was 8-9 ft. high and laid 13 eggs was believed to have been the basics for many of the stories of the Roc. 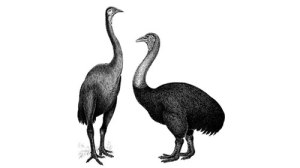