In the Danish folk traditions, Havmand is the merman that lives along the shores. His appearance is handsome, bearded and is friendly for those who meet the Havmand. The female counterpart of the Havmand is the Havfrue that is seductive and predatory. The Havmand sometimes has blue skin and green hair. It is not clear whether the creature that was reported to the Bishop of Bergen in Norway was indeed a Havmand but the finders said that they saw a beached creature with the front paws of a seal calf and the face of a man and was 28 feet long. 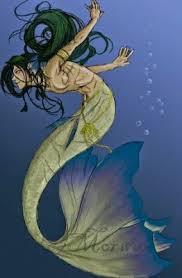